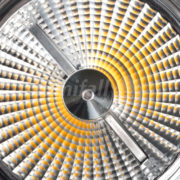 LED bulb which looks like a classic halogen? Yes, now it’s possible! LUNAR AR111 is a sensational LED light source, which provides a quite good alternative to traditional halogen AR111/QR111 reflectors. Two COB LEDs, each with a power of 6W, were placed on both sides of the radiator, and the light generated by the LEDs is reflected from the […]

Any cookies that may not be particularly necessary for the website to function and is used specifically to collect user personal data via analytics, ads, other embedded contents are termed as non-necessary cookies. It is mandatory to procure user consent prior to running these cookies on your website.